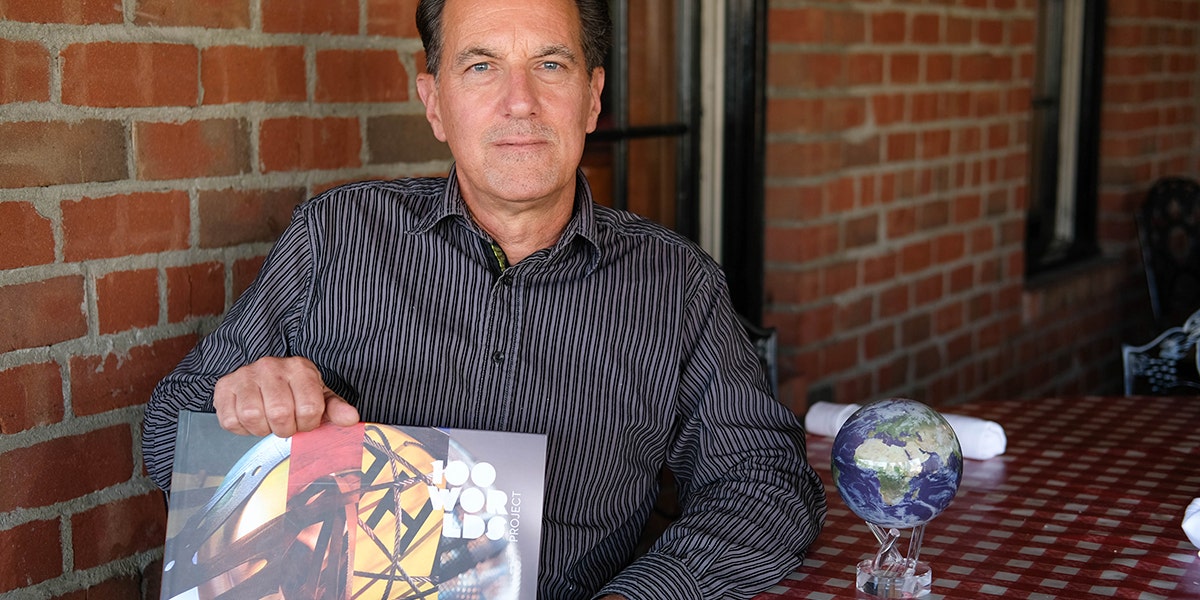 The best thing about a globe is that it’s an entry point for everybody. Everybody plays in that world…it’s a community-building tool  –  Ron Miriello

As an employee of MOVA, I’m always drawn to other globes when I see them (it’s hard not to be). Naturally, I was intrigued when I stumbled across the 100 Worlds Project, a collection of interpreted globe sculptures built from materials you would never imagine a globe to be built of – pencils, shoe soles, book pages, steel cables, just to name a few. When I found out that Ron is based in San Diego, I reached out to him and he suggested getting lunch to talk about our globes.  It was on a sunny Friday afternoon that my co-worker Tori and I met up with Ron at a local seafood joint.

I have to admit, I was a little intimidated to meet him at first. However, after getting the formalities out of the way and deciding on what to order, we jumped into our conversation. We talked about his summers in Italy, a friend of his who owns a huge at-home collection of maps, and the Galileo Museum in Florence. Ron shared a rather wistful anecdote about the dying art of craftsmaking due to the spread of automated machinery. Tori and I explained how the MOVA Globes are hand-assembled and how many parts of our design process are patented. As a brand consultant and designer, Ron brainstormed some ideas for our globes – he suggested creating more sculptural bases and art pieces that show off the globe in a new way and add new meaning. “Even though we don’t do the same thing exactly, [the globe] makes us kindred spirits,” he said.

The key point of our meeting was of course the 100 Worlds Project. Part of the impetus that launched the project was Ron’s longtime fascination and appreciation of globes, but it was also about him rediscovering different objects, items, and toys he has collected over the years:

MOVA: Where did you get the idea for the 100 Worlds Project?

Ron Miriello: I love taking things people think they already know and don’t really look at. Something ubiquitous – It’s a globe, you don’t need to look at it – but getting people to pause and see it in a new way. Slow them down and make them say, “What the hell is that?” That’s the artistic part of it. I also love doing iterations on things, and that’s why it’s “100 Worlds”. I wanted to do a series. I wasn’t interested in doing art – I just wanted it to be things that I wanted to be surrounded by. And if other people appreciate it, great. 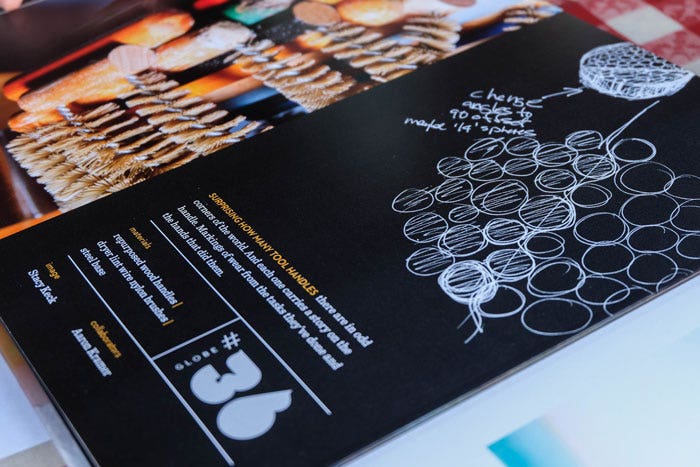 Did you have a certain process for creating each globe?

RM: I work with sketches a lot. Once I have the form down, I can figure out how to make it. I wanted each one to be drastically different from another. Some are found objects. Some are wood and some are made of cast-iron. I completed 50 in about a year, maybe 14 months.

The important thing we learned was that the 100 Worlds Project was not a solo endeavor. Ron credited the inspiration behind many of the globes to ideas given to him by family, friends, acquaintances, and strangers as he was undertaking the project. He worked with welders, graphic designers, printers, artisans, and craftsman to help bring the ideas and globes to life. One of my personal favorite globes from the project is World #42 a globe constructed from sharpened pencils wrapped by a bent ruler armature. Ron’s mother, a respected costumer designer for the San Diego Opera, had sharpened numerous pencils, which Ron then fashioned into a globe. She is listed as the maker.

When the globes were exhibited for the first time, they were accompanied with plaques that credited the names of everyone who contributed to their design and creation, effectively recognizing them as co-creators.

This whole project is about telling people, “yes you are an artist.”

We can certainly relate – we always receive  suggestions for new MOVA designs, whether through from our Idea Submission Form or at tradeshows. There are people who want to contribute to our collection and join our vision for creating these dynamic worlds. “When people say, ‘Oh I want a globe that looks like this’ – that’s when you know they are in the game,” Ron remarked. He shared a story of a welder he worked with named Roberto:

RM: Roberto’s son walked up to the final globe piece that his father helped create and exclaimed, “Dad’s you’re an artist! I want to be an artist.” That was cool. A lot of this happens with kids. They dive right into the globe metaphor.

He told us another story of an employee’s 9-year-old son who saw Ron’s sketches and decided to draw his own. He left them on Ron’s desk and the sketches were titled Zach’s Globe:

RM: He stapled his little 8.5 x 11 ideas together to form a journal book. When the gallery opened, I hung his piece in the restroom and created it as Zach’s Gallery like he was part of the show, and put a plaque there for him as well. He was kind of sheepish about the whole thing, but boy, you better believe he remembered it.

So, why is it called the 100 Worlds Project when there are only 50 globes? Ron insisted that he was not a full-time artist, and instead, he would love for other people to take the reins and continue the project from here. He said: “I wanted to facilitate a community, not people just saying ‘Wow, Ron is really creative’. I mean, I love to hear that, but this was more about demystifying the creative process. The goal was to get people to think, “What would I do?”, instead of looking at a painting and saying “how in the world can I do something like that?”

What’s next for you?

RM: I’m working on a community bike center in Liberty Station. It will be a central point for all the biking clubs to come together, and there will be some bikes on display. But like the globes, I don’t care that this is art. I don’t care for it to be critiqued. I wanted to do…

As the lunch hour was coming to a close, I started to see that Ron wasn’t just an artist. Between sharing his words of wisdom and suggesting that we hold a student design competition, I can see that he has great appreciation for art and design and bringing people together. Furthermore, the 100 Worlds Project shows us not only how cool globes are (duh), but how powerful it is when people come together to create something that connects us to the world.