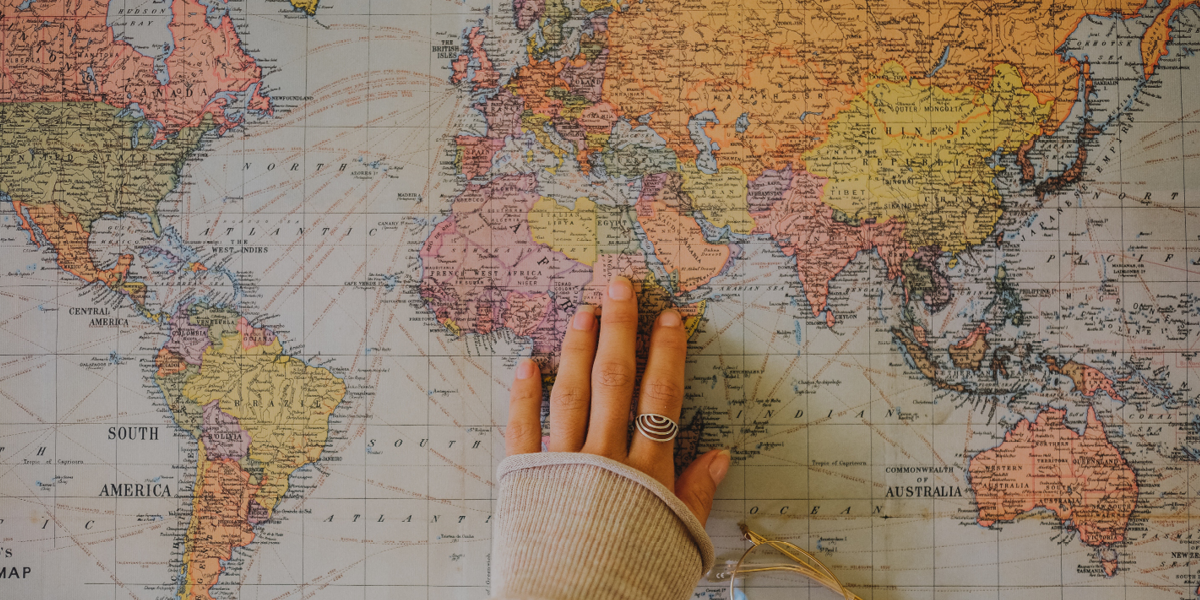 All maps lie. And all maps are wrong. As geographer Mark Monmonier claims, “Not only is it easy to lie with maps, it’s essential. Maps and globes, like speeches or paintings, are authored by humans and are subject to distortions. These distortions can occur through alterations to scale, symbols, projection, simplification, and choices around the map’s content. Monmomier continues: “To avoid hiding critical information in a fog of detail, the map must offer a selective, incomplete view of reality.” This is the cartographic paradox: to present a truthful picture, a map must tell lies.

To say that maps and globes are wrong is not to foster cynicism or distrust, but rather to promote a healthy sense of curiosity and critical thinking about what we are shown on maps. Here we’ll look at two ways maps and globes can be wrong: with political borders and other forms of altered Earth depictions.

Political borders are one of the most common map controversies. It is rare for a map to be able to explain the complication of political boundaries, especially in contested areas. And the truth is that there are disputed territorial boundaries among the majority of countries on Earth. Even the United States has contested boundaries, with active disagreements with Canada, the Bahamas, Cuba, and Colombia, among others. This is why maps are important and valuable—they make assertions of power and often reflect the interests of those who create them. Mapmaker and writer Denis Wood writes, “It is not that the map is right or wrong (it is not a question of accuracy), but that it makes a stand while pretending to be neutral on an issue over which people are divided.” Here are a few examples of these divisions and maps making a political stance.

One space of deep division and disagreement is the territorial dispute surrounding Israel and Palestine. At its core, the dispute is between two groups, both vying for self-determination and laying claim to the same land. The result is a complicated map of territorial assertions that can change seemingly overnight and has not yet concluded in a definitive political map of the region. Propaganda maps abound, and other world actors, including other countries, play a deeply intertwined role in legitimizing and delegitimizing the claims of both pro-Israel and pro-Palestine interests. This includes outside forces choosing to map land rights only to Israel, only to Palestine, or territorial claims of both parties. No map of the region exists that all can agree upon. 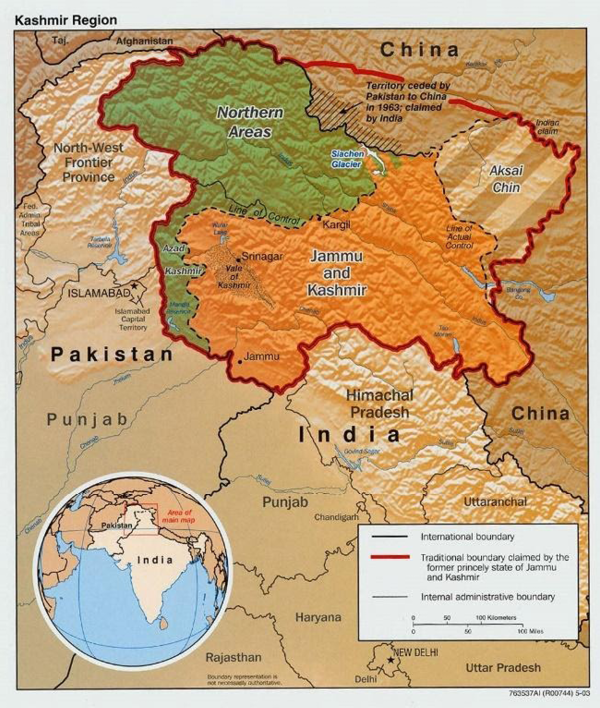 A second deeply militarized and contentious border is Kashmir, which is concurrently claimed by both India and Pakistan, with additional complications from China. These disputed claims make the region notoriously difficult to map accurately. Current political borders are not agreed upon, and even areas where there is agreement, modern borders do not reflect the region’s complex history, the impact of colonial interference, or the distribution of diverse groups of people in the area. Where do we draw the lines when three different powers are making claims on the same space?

Other confusing world borders include Morocco’s border with Western Sahara. Typically, the dividing border between the two regions is marked with a dashed line, a true rarity on world maps and globes. What is the meaning of this dashed line? The answer can vary depending on who you speak to about the contested territory. The land is claimed by both Morocco as well as the stateless Polisario Front, an indigenous rights movement fighting for Western Sahara’s independence. As of 1991, there is a United Nations truce brokered in the territory, pending a referendum on independence, which has not yet taken place. Presently, Western Sahara is non-self-governing, hence its dashed line connection with neighboring Morocco—tenuously claimed, but effectively at a stalemate. 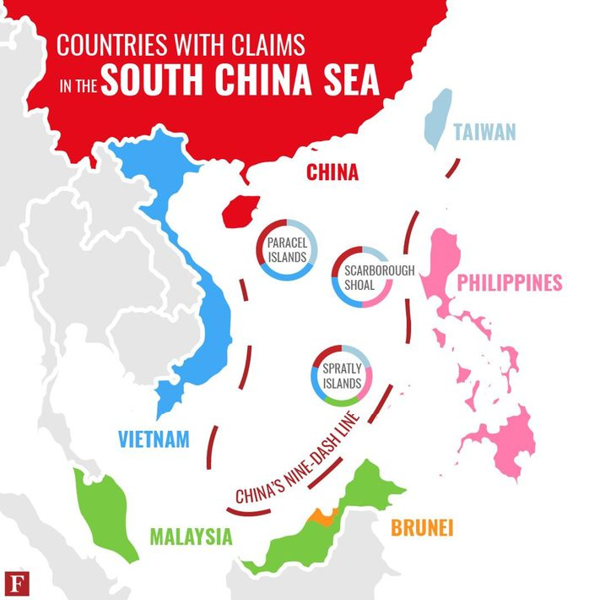 China’s “nine-dash line,” otherwise known as “cow tongue,” in the South China Sea is also a potentially misleading dashed world border. Unlike the other borders discussed here, this dashed line extends into ocean areas, largely uninhabited and fluid. Though scarcely populated, this territorial claim contains important defense and natural resources, and also, controversially, flouts international agreements about what constitutes international waters. Tensions are high across the region, with frequent military patrol, drills, and even exchanges with rivals. China’s assertions into the South China Sea is not the country’s only territorial dispute, nor sole area of contested mapping, but rather part of a pattern of the superpower using maps to help legitimize their claims in contested regions.

All World Maps Are Wrong 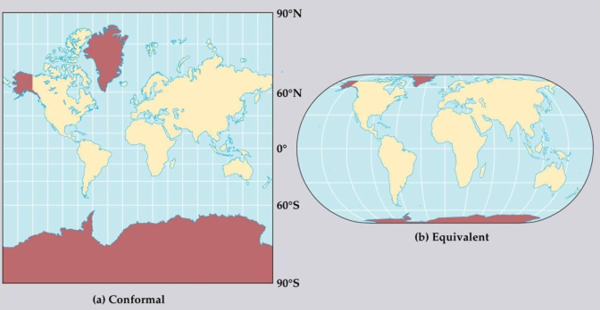 Problems with maps are not just limited to conflicts surrounding political borders. Maps have other inconsistencies as well. For example, any flat map is tasked with the challenge of representing our spherical Earth as a two-dimensional object. This means that the mapmaker has to use a projection, and different projections will depict the Earth in slightly different ways. Where some maps, like conformal maps, are better at preserving accurate shapes of continents, other maps, like equivalent maps, are better at preserving accurate sizes of landmasses.

For example, look at Alaska, Antarctica, and Greenland in the maps above. They change dramatically depending on their projection. In the conformal map, Greenland looks larger than the entire continent of Africa. In reality, Africa is 13 times the size of Greenland! The equivalent map shows this size difference more accurately, but also makes Greenland’s shape very difficult to interpret.

Some maps do both tasks well—but they usually have strange shapes, such as the Goode homolosine map. Continents are the correct shape and the correct size, but now the oceans are split apart! All maps are forced to make choices of what to focus on, and what will necessarily be distorted.

How does it feel to see the world depicted as below, with the continents in new locations? Some of the earliest globally-distributed maps came from European mapmakers, and so, not coincidentally, Europe typically finds itself front and center. This is not accidental, but rather a purposeful choice by those authoring the maps.

Whether a map or globe, one thing that seldom is questioned is the decision to put the northern hemisphere (Europe, North Pole) on the top and the southern hemisphere (Australia, Antarctica) on the bottom. What! But how could it be any other way? Well, at the end of the day, planet Earth is just an orb floating in space, and there is no “up” or “down” or “north” or “south” in our galaxy, or the wider universe. The choice to put north or south where we usually see them is an arbitrary, not an absolute, choice—and even jokingly contested by some. 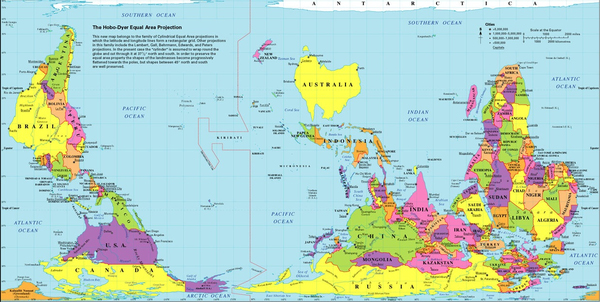 There are very few absolutes when it comes to depicting the Earth on maps and globes. All maps are created by humans with varying interests, and all maps necessarily distort, omit, and: yes, are a little bit wrong. It just depends on who you ask.

BIO: Stacie A. Townsend, M.A. is a professor of geography at Los Angeles Mission College. She teaches courses in physical, cultural, and world regional geography. She is finishing her PhD in Geography from the University of California, Davis.

« How One Piece of Décor Can Change a Room